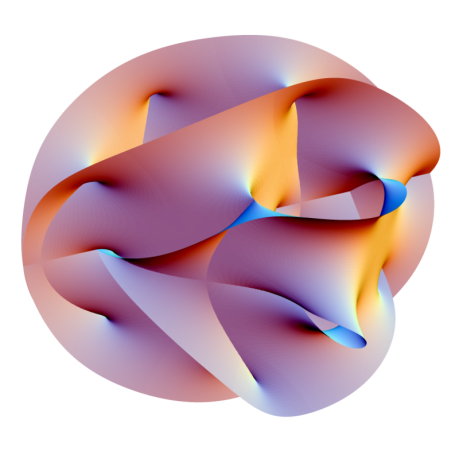 It has been, again, a long time, since I last wrote my blog-post! It is not that I don’t want to write, it is just that I have been having so much fun (doing my research) and somewhat busy (changing my apartment and doing similar non-productive chores). Now that I am within fewer steps away from my department, and that I have decided to spend rest of my PhD days in this new apartment, I can devote more time to writing.

This post is about kappa symmetry which is a tool to obtain the supersymmetric brane configurations. Now, Susy (the heart of my research), is not only the most beautiful and difficult 😉 symmetry but also the strongest symmetry that I have ever encountered.  For some theories, it turns out that a supersymmetric configuration automatically implies the equations of motion (the on-shell configuration)! Therefore, supersymmetric theories without the Lagrangian formalism can be probed and studied! Furthermore, there are usually alluring geometrical interpretations associated with the configurations.

), which, according to the AdS/CFT correspondence, represent line defects (analog of Wilson & t’Hooft lines)  in the mysterious (2,0) super-conformal field theories in

Consider any SUGRA with bosonic (

) degrees of freedom. Now it turns out that one can set the

on-shell. I don’t clearly see that, but it seems that the supersymmetry constraints the theory to that extent that equations of motion render the

implies equations of motion. Now the question whether the

configuration preserves supersymmetry reduces to the question that what transformation parameters

. The structure of local supersymmetry in SUGRA is given by

is a Clifford valued operator with maximum first order derivatives.

. Now we note couple of points

As of now, we don’t have the complete formulation of M-theory (a unification of five superstring theories). We have a good idea of how M-theory should look like at low energies. In other words, we know the dynamical degrees of freedom with large wavelengths and they make up supergravity theory (that we know and understand) + M branes. We even have a Lagrangian for the theory at that energy scale which is given by

The first term corresponds to

type II A/II B supergravity or

supergravity. The second term describes both the brane excitations (giving rise to field theories) and interactions with the gravity. The action here is known as brane effective action.

Now for my research purpose, I am supposed to find the placement of M2 brane in the SUGRA background (mentioned above) such that there is a supersymmetric bosonic configuration. The placement of brane is based on

. Here again we set the

which is compatible with the on-shell configuration (brane equation of motion). To get the supersymmetric configuration

Now again due to the reasons beyond me for now, the restriction of these transformations for the bosonic configuration

Now it turns out that not all the fermionic degrees of freedom in this theory are dynamical.  This forces us to work at the intersection of kappa symmetry gauge fixing conditions and

Now from the above equations and little bit of linear algebra, we finally have

which is known as the kappa symmetry constraint.