Physics is all about understanding the phenomena that occur in nature. We essentially want to write down the equations which describe these phenomena and can be used for the benefit of the humanity. Blackholes are the naturally occurring mysterious objects in the space. They have very strong gravitational pull and are condensed in very small  region where quantum effects are appreciable. Therefore, we need to formulate a successful theory of quantum gravity which will not only give us a better understanding of the nature, but also provide the powerful practical tools in the future.

The Holographic Principle is a physical principle of the successful theory of quantum gravity. Although we don’t quite understand quantum gravity, we can extrapolate the notions from the already well established physical theories and cleverly deduce a pattern which should be manifest in quantum gravity.  The pattern here is essentially the existence of a precise and very strong limit on the information content of the spacetime. The holographic principle intimately connects the number of quantum mechanical states with the region of spacetime and builds up the stage for a consistent theory of quantum mechanics, matter and gravity. String Theory is the theory of quantum gravity which has successfully realized this principle through the AdS/CFT conjecture. It is important to note that any experiment that directly validates the holographic principle does not necessarily validate the string theory itself.

Recently, my friend Suzanne Jacobs introduced me to a project named Holometer at Fermilab which is an attempt to experimentally verify the holographic principle. I aim to explain the concept behind the working of the Holometer in this, hopefully, self-contained, blog-post.

Now, general relativity is a theory of spacetime and matter. It is a good theory for large length scales (rough estimate is  from radius of the Earth to that of Milky-way galaxy and beyond!). At these scales, matter can be appropriately described by the classical mechanics and the spacetime can be treated as a continuum. At the length scales smaller than that of radius of earth, we have Newtonian gravity in which space and time are treated separately and matter is again governed by classical mechanics. When you go down at the length scale of an atom, gravity becomes weak and other forces like electromagnetic forces become dominant. This is the regime of quantum mechanics. So for all practical purposes, we can forget about gravity and classical mechanics, and just work with the Hilbert Space of quantum mechanics. In very loose sense, Hilbert space is the stage for quantum theory just as spacetime is the stage for general relativity.

To probe the smaller length scales, you need to apply more energy in the system.

. Now this is fine. We have built the particle accelerators capable of achieving very high energies and verifying the theory known as Standard Model. But since we live in a universe with gravity, there is a theoretical upper bound on the amount of energy that we can put in a region of space without creating a blackhole (of which we don’t know much about). And at this point gravity (a perfectly understood concept in classical domain) comes back to haunt us in the quantum regime. This length scale is known as Planck Scale and its numerical value is 1.6×10^(-35) meters. And at this length scale we need to formulate a theory of quantum gravity.

Many physicists believe that the spacetime should be an emergent notion in quantum gravity. Based on this school of thought, and theoretical calculations like covariant entropy bound, the Holographic Principle has very nice interpretation. It basically associates a Hilbert Space with each causal diamond in the flat spacetime as shown in the picture. Here we are considering 1+1 spacetime manifold. 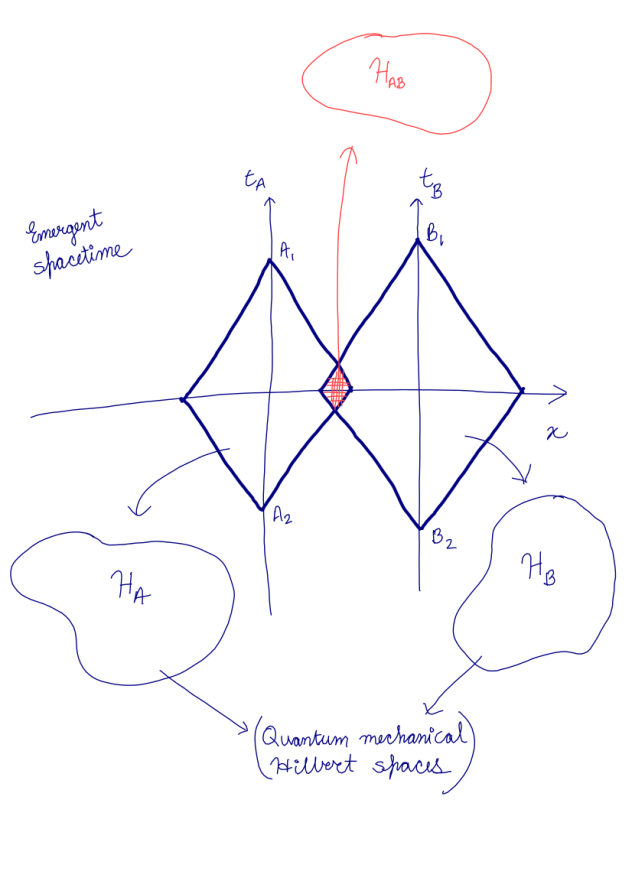 A causal diamond (here, rhombus A1A2 and B1B2) is roughly the region of spacetime which is causally connected and is characterized by the proper time parameter

(the distance along time axis tA and tB). Of course, here we assume that the observers are at rest with respect to this coordinate system. The Holographic principle assigns the Hilbert spaces

with the causal diamond A1A2 and

with the diamond B1B2. Essentially, these Hilbert spaces have states amongst which the causal connection can be established by definition. The intersection of the causal diamonds (shaded red) is the region of spacetime causally connected to both the points A2 and B2. The Hilbert space associated with this region is

. And now the holographic claim is

is completely determined by some mathematical manipulation of the spaces

the geometry of red shaded region is completely governed by the

(The matter of this blog-post from here is based on the non peer-reviewed article https://arxiv.org/abs/1506.06808. I shouldn’t be held responsible for any inconsistencies in the subsequent paragraphs :))

in the Hilbert space

, which holographically represents the set of world lines in the spacetime manifold. Since

is a quantum mechanical object, the set of world lines it corresponds to should exhibit the quantum behavior.

from its classical counterpart

. In other words,  by the very definition of this function,

if there is no quantum or the holographic behavior in the evolution of the world lines! And if some experiment establishes the equality, we can then safely say that the spacetime is perfectly classical and throw the holographic principle out of the window. The non-zero value of

represents the “jitter” or the “fuziness” that Fermilab’s Holometer is trying to detect.

Now a quantum mechanical state dechoeres (becomes more classical) with time. This effect can and will make the time-domain correlation function 0 which would destroy the entire purpose of the experiment. The condition to measure the non-zero

before the decoherence kicks in, gives the bounds on the dimensions of the experimental apparatus (length and size of the mirrors in the interferometer).

Physicists at Fermilab have an interesting construction to fish out the holographic “jitter” using certain “models” and the details of the experiment can be found at https://holometer.fnal.gov/faq.html.

My observation as a graduate student

This seems to be a good project to uncover and understand the physics at the Planck scales without having to achieve tremendously high amount of the energy. The results reported by the physicists, which are based on a particular model of the correlated holographic noise (cHN), at Fermilab are negative till now. But, as with all the scientific research programs, we now know what is incorrect and move on with the new and better models to gauge the cHN.

Curiously enough, the arXiv papers I consulted to study about these models are not peer reviewed and contain several instances of the ambiguities (broken Lorentz invariance for example). I am not really sure what to make of this, but again, these are just my personal views and I would follow this research only if the articles get published in a good peer reviewed journal.