Determining the causal structure of spacetime (I)

In order to make the observable predictions from a consistent physical theory, we are interested in finding how degrees of the freedom evolve and behave. For that, we try to obtain/formulate equations of motions, which capture the physics at the infinitesimal scale. Once we embed the physics in these equations, we solve them and make the verifiable predictions. For instance, in Newtonian mechanics, we study point particle moving in one dimension

. We, then ask how this degree of freedom behaves or evolves in time (which, again, is an assumption). For such a theory, we have the equation of motion

which contains the spectacular physical insight from Newton (I won’t even try to elaborate that because it deserves a separate blog post). Now this is a linear second order differential equation which requires two initial conditions. In other words, if you give me the initial position and initial velocity, I can tell you the entire future of

by solving the differential equation. In fact, for constant

Another way to look at it: equation(s) of motion (of a theory) give us the prescription to evolve the initial data (known values of the degrees of freedom) to final data that we are interested in.

Now Einstein’s gravity theory has the components of the metric as the degrees of freedom. We denote them by

. Another radical difference (common to all relativistic theories) is that the space and time are unified into a single parameter space called spacetime manifold (inheriting all the structures of the pseudo-Riemannian manifolds). So here we ask our favorite question: how do

evolve in the spacetime. Mathematically, we want to know the

is the representative of the spacetime coordinates from now on.

This time, we use the insight from Einstein to write the equation of motion for general relativity (in vacuum) as

where the symbols have their usual meaning. Here we are working on the 4 dimensional pseudo-Riemannian manifold

is to be determined by the equation of motion. We define a Cauchy surface

which is a c0dimension 1 surface in

on which the initial data for Einstein’s equations is defined. So what does this initial data comprised of? (We will take a small detour and return to the topic in next blog post) 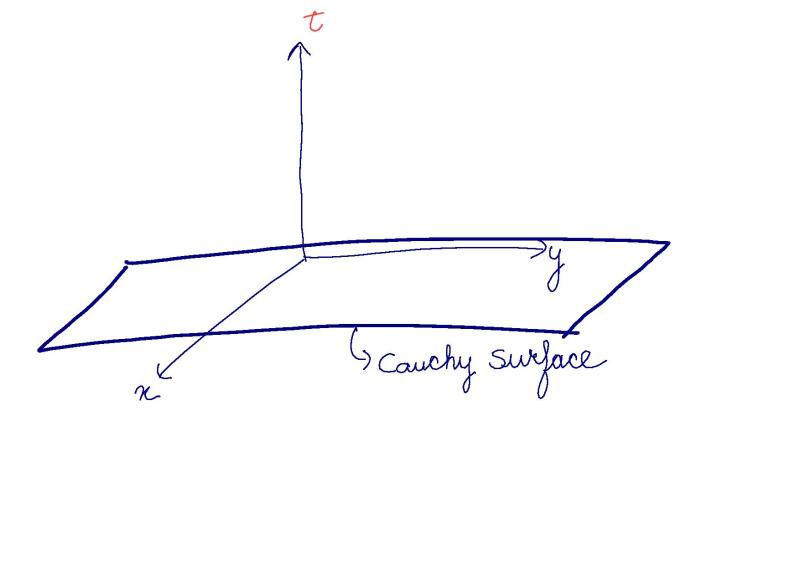 In order to understand that, we start with a simple example. Consider a 2+1 manifold as shown. Now let us consider a wave operator on this manifold given by

. For a scalar degree of freedom denoted by

acts on it to generate a wave equation

. Here we are not interested in solving the linear second ordered partial differential equation. We want to deduce the properties of the wave, like it’s speed of propagation and the extent to which a disturbance/fluctuation in

Let us say that we know the value of

surface (where we might have a specified source or some boundary condition). The surface is essentially a codimension-1 surface and we will call the coordinates

as internal coordinates (w.r.t the surface). Thus we can now easily compute the internal derivatives (from

) and denote them by

. Let the exterior/normal derivative to the surface be

In this example, we have a Cauchy surface

. Clearly the second derivatives of

can be computed from the given data. And here we use the wave equation (or equation of motion in general) to find the missing second derivative of

. The co-normal to the surface

. And then we perform the coordinate transformation to chart

. Note for this particular case

and the new coordinate chart is exactly equal to

chart. This is because

is already perpendicular to the time coordinate.

It is not very difficult to show that the wave equation

, under the above transformation, converts into

and we call it the characteristic form. Now there are two situations

In our example, the characteristic form is identically 1 (just look at the coefficients of second derivatives (-1+1+1). Hence we don’t have any characteristic hypersurface for the degree of freedom

with the Cauchy surface as the entire

plane. It is not surprising if you think about the plane electromagnetic waves, which again don’t have any characteristic hypersurface and obey the same wave equation we wrote above.

Moving on, we obtained an equation for a surface in new coordinates

. Physically, this is the surface beyond which we can not evolve the degrees of freedom uniquely (as the second derivative is not uniquely determined). Now we need a mechanism to generate this surface.

, where we now generalize it to

. It is not difficult to check that in this case the characteristic form becomes

. For our Helmholtz wave, we get the form

Now the bicharacteristic curves are generated in by the linear ordinary differential equations, with a parameter

For our Helmholtz wave, one can easily solve them and find the solutions

. They actually form the rays of a cone (with appropriate boundary conditions) traveling with speed 1.

We have shown that if we introduce some perturbations at some point in Minkowski manifold, those perturbations will travel at unit speed and won’t escape the cone. This essentially exhibits the causal structure of flat Lorentzian spacetime which is in concurrence with the wave equation. 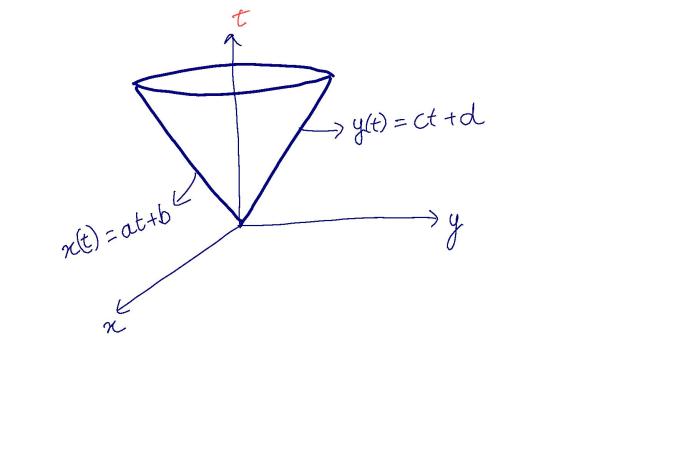